Ancient Aztalan is a prehistoric Native American village in southern Wisconsin that was occupied between 800-1000 years ago. Archaeological evidence suggests that Aztalan was an ethnically diverse community - some residents were local to the area, but others were newcomers who brought their exotic beliefs, practices, and ways of living with them. Who were these diverse peoples? How did they combine their different beliefs and practices to form a joint community? Did they get along, or did their differences ultimately lead to Aztalan’s abandonment? Despite nearly 100 years of investigations at Aztalan, these questions remain unanswered.

This project is designed to locate and excavate ancient domestic structures at Aztalan and integrate those findings with the unpublished architectural data generated in the 1960s and earlier. Aztalan's houses were built in a variety of forms and with different construction techniques, which may reflect Aztalan’s diverse ethnic groups. Understanding the details of these houses and their contents will be helpful in understanding how the people of Aztalan cooperated in daily life. Additionally, architectural variability in Aztalan's palisade walls also has the potential to reveal information about the site's diverse occupants. The project utilize ground penetrating radar and magnetometry to detect archaeological features under the ground surface. 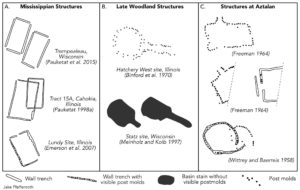 Domestic structures in particular have great potential to communicate information about their builders and residents because outwardly visible elements like structure shape, entrance, and exterior decoration are openly visible to the whole community. In multi-ethnic contexts, public elements of structures are more likely to be manipulated than low-visibility “hidden” attributes that may be intentionally kept private or otherwise may not be visible from outside a finished structure (e.g., internal organization and construction methods and materials). The public/external and private/hidden aspects of a structure can also reflect different, overlapping identities of a family simultaneously.

Mississippian structures in the Midwest are typically rectangular, semi-subterranean, and constructed using wall-trenches. Wall-trench construction involves erecting posts or possibly pre-fabricated walls into previously-dug linear trenches that are visible archaeologically as linear stains in the soil. In contrast, Late Woodland structures in the Midwest vary in shape – often within the same site component – and include rectangular, ovoid, circular, and irregular forms. Many have extended entryways of varying lengths that form a “keyhole” shape. They are typically semi-subterranean and most exhibit “single-set post” construction, in which posts or poles are erected into individually-prepared holes. Some are defined only by a basin stain. Aztalan’s structures exhibit a variety of forms and construction technologies, but typical wall-trench Mississippian and single-set post Late Woodland structures are less common than hybrid configurations.

Data from the northwest and northeast mounds and site-wide material assemblages are consistent with the interpretation that Aztalan was a frontier of diverse peoples and multi-directional influences. From this perspective, the interactions at Aztalan are not conceptualized in terms of migrants from Cahokia “Mississippianizing” local Late Woodland groups in the hinterlands as has often been the case for Aztalan and similar sites in the region. Rather, this perspective provides an alternative non-Cahokia-centric model – that Mississippian migrants at Aztalan were not hegemonically dominant, but were influenced by the Late Woodland peoples with whom they interacted in daily life. This differs from many discussions of interaction that are framed around colonialism, acculturation, core-periphery relationships, and dominant-subordinate dichotomies. Overall, viewing Aztalan within a frontiers framework gives greater agency to indigenous peoples by de-emphasizing the immutability of socially-complex groups. The proposed research explores multi-directional interaction at Aztalan by examining how ethnic identity was expressed in domestic household and palisade wall architecture.

Monumental works that define the layout, boundaries, and appearance of sedentary communities, such as Mississippian palisade walls and platform mounds, provide ways for diverse peoples to participate in the literal, physical formation of their shared community. This is also a way for migrants to establish enduring, common ties to the physical place alongside local peoples. A shared sense of community identity would facilitate successful integration in other aspects of daily life, leading to inter-group cooperation and blending of daily practices and material culture. At Aztalan, successful integration and shared participation in physically formation of the community should be evident in blended architectural traditions in the palisade walls rather than evidence that they were designed and constructed by one ethnic group.